Circus company with almost 10 years of experience creating and performing street shows. Circo a la Maleta was born from an unexpected encounter between two artists coming from opposite sides of the world. Laureline comes from Belgium and Angelo from Chile, their cultures so different are an asset to create a surprising duo. 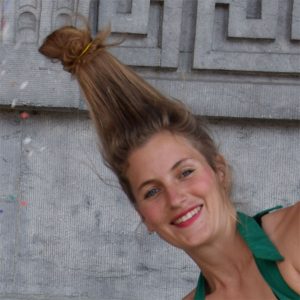 Graduated in 2016 from ESAC (Superior Circus Arts School) in Brussels. (esac.be/etudiants/les-diplomes) Born on the 29th of September in 1989 in Tournai (Belgium) Laureline discovered the circus & its extraordinary world at the age of 6 when taking trapeze lessons in « môme circus , Tournai ». At 15 years, she was introduced to juggling. Since 2009, she has trained full time in juggling. To complete this, she also began taking courses in acrobatics and physical theater in different spaces in Brussels and Santiago. In 2013, she started at the Superior Circus Art School in Brussels (ESAC) as juggler. She deepened her research always inspired by the body’s illusions and the work of a character on stage. After fnishing her studies ; she create the company KI with 2 other jugglers (vimeo.com/182601127). In 2019, She starts her first solo street show « Miss Belgium do her show ». 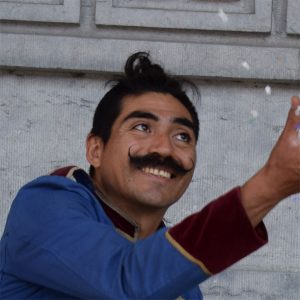 Graduate at “Circo del Mundo”, chile in 2003. Born October 11, 1982 in Santiago, Chile. He began juggling at age 15. In 2000 He enter the circus school " Circo del mundo Chile " where he specialized in juggling and acrobatics. Until 2009 , also carrying out an intensive gymnastics course at " Estadio Chile italiano “. He was present in various shows like : "Ekun a grito de America" ( Circo del Mundo ) with which he participated in various festival in South America. In 2007, he created his first street show "A la suerte de la olla " with two other Chilean artists. He began a European tour with them in 2010. Knowing that the street is the best stage for him. In 2017, he create his first solo show ”MR.POH”. youtu.be/ko3joZ2Tl3w